It’s Bubba’s Time: On the golf course and on his wrist

Bubba Watson has little trouble attracting attention around the golf course these days. The crushing tee shots, pink driver, unorthodox swing, and stylish threads have created a fan friendly spectacle that has even started winning tour events. Watson’s iron play out of the fairways create some of the highest trajectory shots on tour, baffling commentators and panicking greens keepers around the world who cringe at the size of his ball marks and divots. Watson’s thrilling victories this year at both Torrey Pines and New Orleans have solidified his robust fan following and brought hordes of prognosticators who now pick Bubba as a favorite week in and week out on the PGA Tour.

At the Los Angeles open this year, a select few may have noticed that Bubba added a new endorsement to his bag and shirt sleeve for the one day he was able to play in the tournament before having to withdraw for medical reasons. The ultra luxury watchmaker Richard Mille chose Bubba to be one of its brand 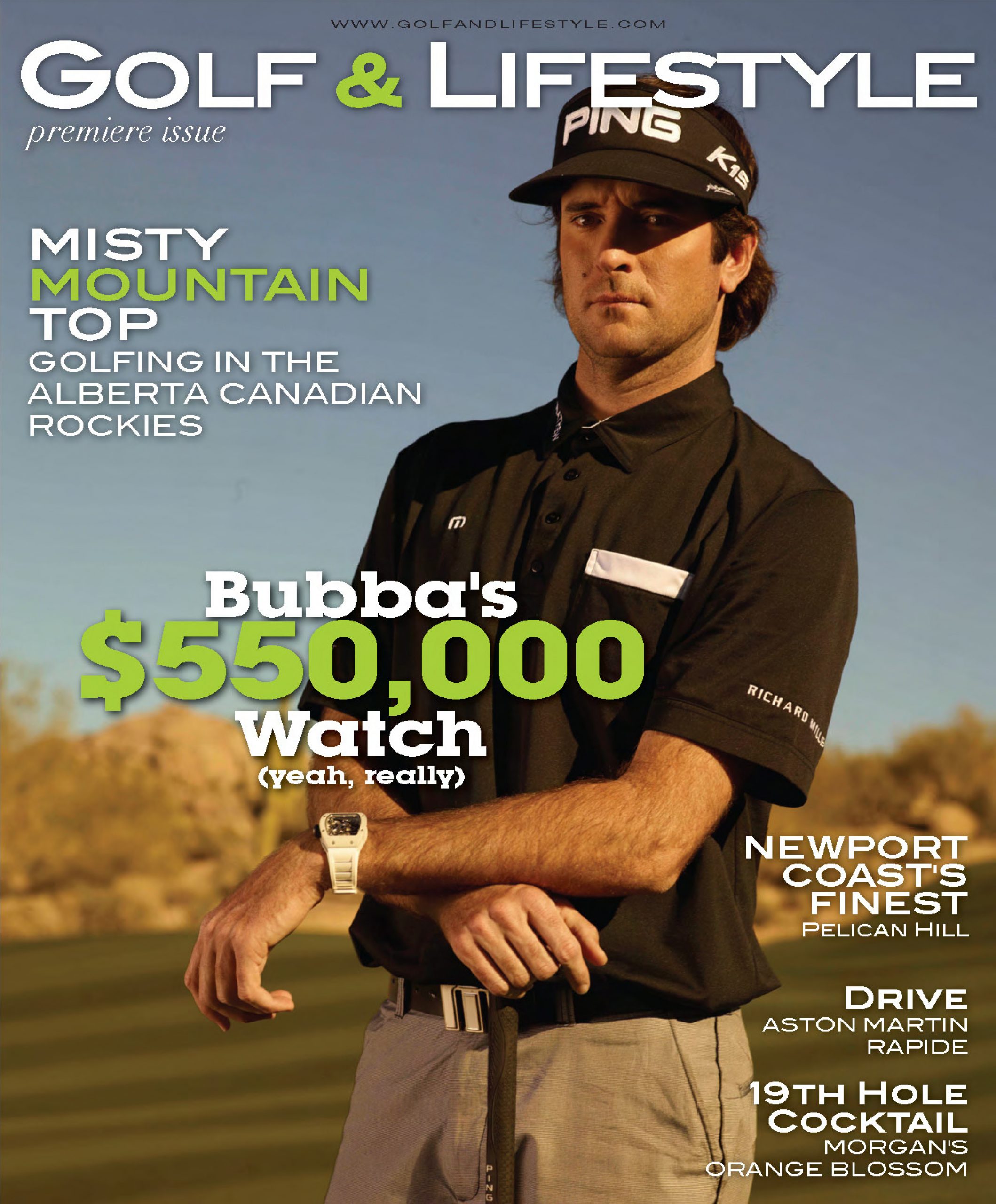 ambassadors, as they are called in the watch world, and even designed a new timepiece for him to use while walking the fairways of the PGA Tour.

Half million dollar timepieces should come with a majestic title that connotes the greatness that is going to be gracing one’s wrist. “The Tourbillon Richard Mille RM 038” would officially be a great title. It has a combination of slightly complex pronunciations, along with a French name and a basic technical coding, but I have left out one major portion of the title. The real title is actually “The Tourbillon Richard Mille RM 038 Bubba Watson.” Watson clearly has the best agent on the PGA Tour because he has taken a self-described “Country Boy” from Bagdad, Florida and covered him with a list of sponsors in direct contrast with his perceived image. Those sponsors include custom Golf Club maker PNG who is known for never discounting, ultra stylish and progressive apparel maker Travis Matthew, and finally Marquis Jet, a private fractional jet service. Combine these with one of the most select luxury names in watchmaking and

you have an athlete who appeals to both John Daly fanbase and Phil Mickelson’s. but his partnership with Richard Mille stands out as a truly fascinating piece of marketing.

Most ultra luxury watch brands have partnered with European Tour players over the years with a few of them more main line brands such as Rolex, Tag Heuer, and Omega focusing on American athletes. So Mille’s choice of Watson breaks this traditional mold. But why did they choose Watson? High end mechanical wristwatches have a reputation for being fragile, extremely expensive and difficult to fix. Watson is known as the biggest hitter on the PGA Tour with an incredibly hard and deep swing, with giant divots and 200 yard 8 irons. Watson swings longer and harder than most anyone else on tour so one can only imagine the shock waves that are rocketing from his clubs, through his hands and up his wrists and arms. Mille had to have known that if they could create a highly complicated wristwatch that could withstand the shock waves of Watson’s golf game, their reputation for designing and executing the creation of highly reliable, incredibly sturdy timepieces would greatly be enhanced.

They then took his concept and added a number of extreme elements to the watch which make it and intriguing conversation piece and thus a fantastic marketing opportunity. 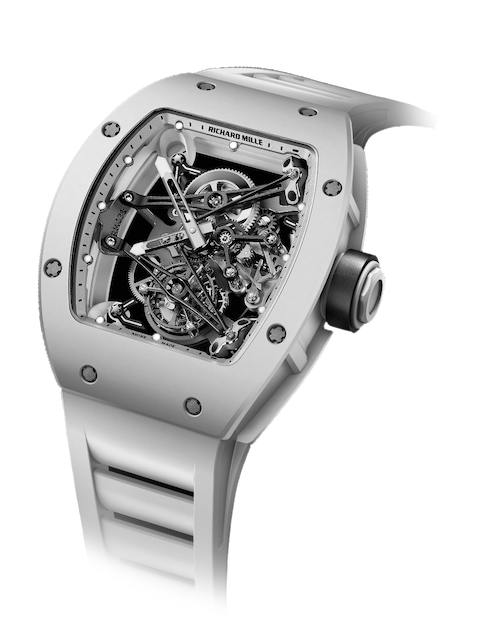 To start with, the watch carries an incredible price tag of nearly $550,000 U.S. dollars. on top of that it is a large timepiece with a white tonneau shaped case and white rubber bands, two aesthetic elements which immediately make it stand out to the fans behind the ropes and watching on TV. the watchcase is made from a Magnesium alloy called Magnesium WE 54, Which is composed of 89% magnesium, 6% Yttrium, and 5% rare earths. They then give this alloy a very unique Electro plasma oxidation treatment named Miarox *R. the bottom plate of the watch, along with all the bridges in the movement, are made of grade 5 titanium, which is an extremely light but durable metal used extensively in the automotive racing and space industries. The watch is therefore large and noticeable, but exceptionally light and tough, making it an acceptable addition to Watson’s wrist while he plays.

But it’s the technology inside that is going to impress the watch enthusiasts who will pay for one of the 39 examples of the watch being manufactured by the Mille assemblage. two pieces of technology are geared directly towards counterbalancing the demands of the game of golf and three others are meant to appeal to the eyes of true watch enthusiasts.

“Variable inertia, Free Sprung Balance” describes the movement of the watch that one would consider the “tick-tock” of the watch movement. A typical Balance is a circular part that oscillates around an axis of rotation. Attached to this balance is a piece called Hairspring, which makes the balance swing to-and-fro, a movement that creates the “tick-tock” of the watch. The free sprung balance is one that Mille has perfected with small screws equally spaced around the balance wheel, the weight of which keeps the “tick-tock” perfectly calibrated, even when a giant amount of force, like a Bubba Watson swing, causes a big shockwave to move through the watch. The large amount of inertia exerted on the watch movement that would normally throw off its timing is thus counterbalanced by this little technological addition.

Additionally, the engineers at Mille have added an “Involute Profile” To the watch movements transition system which is designed to maintain perfect time. The Involute Profile refers to a certain angle that Mille engineers believe is the ideal one for perfect torque transmission and performance, and that angle is 20 degrees. Therefore by combining these two elements the engineers at Mille believe they can offset the negative effects of the golf swing, even one as big as Bubba’s.

Another important aspect of the watch is a tourbillon, one of the highest complications in watch-making. The tourbillon, originally invented in the early 1800s, is a rotating element that offsets the effect of gravity on the movement. Watch movements were originally designed for pocket watches which were not worn on one wrist, but upright in a watch pocket on the waist of one’s pants or vest. Once taken out of this upright position and placed on the wrist, people immediately notice that their watches did not keep very good time. The tourbillion counteracts this negative impact to keep everything in balance.

The watch also has a “Fast Rotating Barrel” which Mille believes increases the power reserve, performance and regularity of the time keeping by permitting them to shorten the mainspring. They have combined this element with another technology called “Barrel Pawl with Progressive Recoil.” When you wind your watch the “Barrel Pawl” is what delivers the power from winding to the actual Barrel.. In most watches you have to wind them multiple times to deliver enough initial energy to the barrel and initiate the movement. With “Progressive Recoil,” the watch winds 20% faster, so with just a few twists of the crown the barrel already has enough power to run.

If all of this technology seems a bit minuscule and somewhat silly, just remember you are trying to create a highly complicated, extremely engineered micro device that would stand the power of Bubba Watson’s golf swing and justifies a half million-dollar price tag. on one level the amount of detail and thought that has gone into this watch is astonishing and on another level it is pretty hard just to scratch the surface and say, “I get it.” Which brings us back to Watson the self-described “Country Boy” who has never had a golf lesson and creates some of the most creative shots on tour. the guy who talked about himself in the third person after his stellar play at the Accenture Match Play championships, who is branded by private jets, custom clubs, ultra cool golf threads, and now ultra luxurious timepieces. There is nothing to not like about this guy and week in and week out it’s fun to watch him and we collectively find ourselves rooting for him more and more. He appears to be appealing to almost everyone and maybe that’s exactly what we need in golf right now, more guys we can all get behind.